BUY TICKETS FACEBOOK EVENTSIGN UP FOR THE OPEN MIC 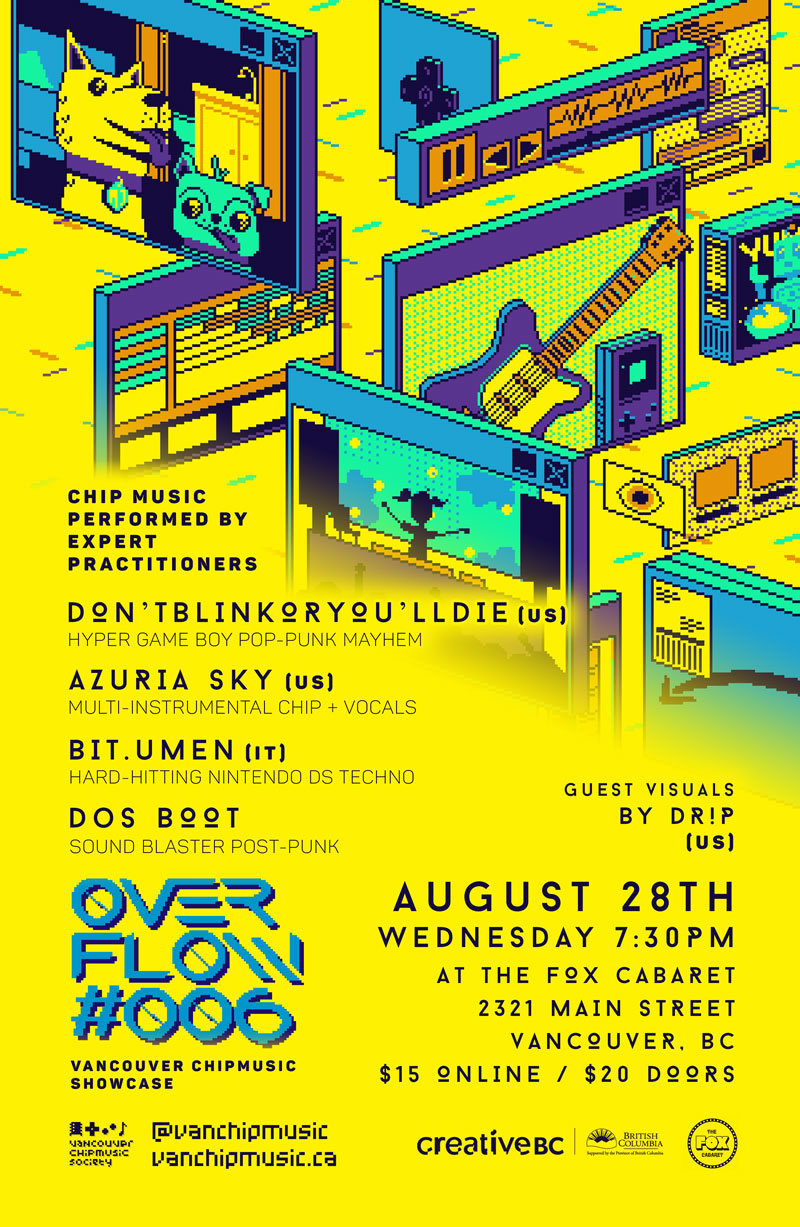 Our next edition of OVERFLOW takes place in Vancouver just before Penny Arcade Expo! Save Wednesday the 28th and check out some of the best low-res chip music and visuals brought to you from around the world!

This time we’ve got Don’tblinkoryou’lldie visiting from the US, with his hyper-melodic Game Boy progressive power-pop that sounds like an expansive, apocalyptic smorgasboard of blast beats, bubblegum pop, and RPG battle music vibes!

On the opposite end of the stylistic spectrum, Azuria Sky comes to us all the way from California as part of her We Were Once Called Spring west coast tour! She graces our show with her introspective and emotional songwriting that combines meditative Game Boy strains with her calming, angelic vocals – not to mention her broad range of musical prowess in guitar, piano and tons of other instruments!

We’ve got some killer local talent on the lineup too – bit.umen (originally from Italy) is bringing some amazingly dark-yet-melodic techno made using nothing but Nintendo DS handhelds running the KORG DS-10 synth software.

We’ve also got DOS Boot – who you might have seen at a previous Open Mic – with a multifaceted setup consisting an old Sound Blaster-outfitted laptop, a modified Guitar Hero controller, and a bevy of other freakishly archaic devices!

On the visuals front we’ll have pixel-art master DR!P visiting all the way from Michigan! She’s been responsible for many of your favourite chiptune artists’ pixel art, and has provided live visuals at many of the world’s biggest chiptune shows and festivals. We’re especially honoured to have her wreak havoc on the Fox Cabaret’s massive projector screen.

As usual, we’ll start with an OPEN MIC SESSION where up-and-comers can plug into the sound system and share the music they’ve been working on with the crowd! SIGN UP HERE:
http://vanchipmusic.ca/overflow-006-openmic

BUY TICKETS FACEBOOK EVENTSIGN UP FOR THE OPEN MIC